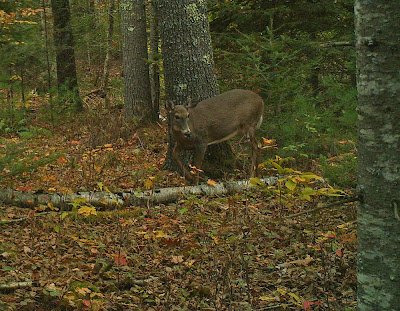 Good morning everyone. Wow. What a difference a day makes. Friday was t-shirt weather and Sunday morning we dressed to make snowmen and shovel the deck. The first big snow event hit the East coast Saturday night into Sunday morning. The wind on the bay was gusting well up into the 30s. The heavy snow brought a pine tree down across our wires blowing the fuse at the end of the driveway. Since it was just us and no one else on the street I knew we were in for a long wait. Thank goodness for the outhouse, the hand pump at the well and 5 gallon buckets that balance well on a sled. 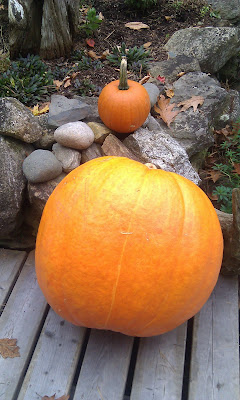 Sawyer and I have been walking the woods looking for something to fill the freezer. Our new game camera allows us to be where we aren’t and see when the deer and other wildlife are passing through. I love being in the woods this time of year, even if I am sitting in a snowbank. The closeness of the trees is no less marvelous than the wide horizons of summer sailing. It is all “chicken soup” in my book. Getting out to ramble around in nature is just the ticket, winter or summer. I have been re-reading Thoreau’s “Maine Woods” while I sit in the dark early morning woods listening to barred owls and coyotes off in the distance. I love this season. I try not get too distracted by the million things I have to do back in the office.

Have a great day. Be well. Do good. And have a wicked happy halloween. 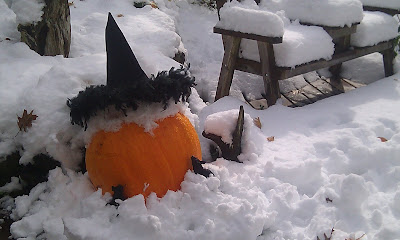 Good morning everyone. This postcard was sent to me by Oscar Richardson. Oscar and his great Uncle Jack DuBose sailed with me years ago. I thought the world of Jack and he sailed annually for several years running until declining health forced him to “swallow the anchor.” I will never forget Jack, in his thickest southern gentlemanly drawl, asking, “Capt Barry, can y’all have yaw man build me a fiah in the fiahplace?” “Jack it’s 70 degrees and it’s only 8AM!” When Jack was a child his family summered at Sedgewick on the Benjamin River, a beautiful little “hole” off the Eggemoggin Reach with a well marked but none the less tricky winding entrance. I say “hole” because the harbor is literally a hole in the ground running along a fault line that bisects the Eggemmoggin Reach and forms the Benjamin River. In the middle of this small anchorage is what I assume is a glacial pocket 60′ deep, perhaps a kettle hole created when a chunk of ice broke away from retreating glaciers. But that doesn’t have much to do with the picture on the postcard.

Anyhoo, Jack grew up summering with Havilah “Buds” Hawkins, Mary Day, and Jane Hennings at Benjamin River. Jane told me that Jack once took her out sailing and wouldn’t give her one shoe back unless she gave him a kiss. I wonder what Jack did with the shoe? But that still has nothing to do with the postcard. The picture on the postcard is of a 4 masted schooner loading ice at a place we call the Punch Bowl, a little pocket of a harbor along the edge of the Reach just west of the bridge. Ships didn’t actually tie up in the Punch Bowl. Instead, they tied up along side the granite bulkhead still visible today just outside the Punch Bowl. Ask me to point it out next time we are near the Deer Isle bridge. From the other side of the hill came ice harvested from Walker Pond, another glacially influenced depression in the landscape. The ice was elevated up the east side of the hill and gravity did the rest I guess. The three masted schooner pictured here would have carried quite a few ice cubes which was worth a fair penny on a hot and humid day before mechanical refrigeration was invented, especially in southern climates where cutting ice from ponds just wasn’t going to happen. Warm lemonade on the veranda doesn’t sound all that refreshing. Shipping ice was big business once upon a time keeping many schooners busy and huge ice houses could be seen especially along some of the larger rivers like the Kennebec above Bath.

So there you have it. My version of history with all its inaccuracies as related to me through Jack’s experience. I could probably research the truth about ice harvesting at Walker Pond and the ice industry in Maine. There are entire books about the subject. But history through the eyes of folks like Jack is quite interesting as well.

Have a great day. Be well. Do good.

Good morning everyone. Holy cow doesn’t time just whiz by. Do any of you have any ideas on how to do more in a day than humanly possible and still be present with those you love and care for? Well, the 2011 season has come to a close. The schooner is blanketed in shrink wrap for the winter and most of the crew have moved on. Katie will be staying on part time to varnish, paint, and maintain everything. I will be devoting my winter to maintenance as well. The office comes first. This is the first day I have been in the office since????? I still have some winterizing projects aboard the schooner before the docks come out but now is time to sit down and get next season organized. Have you seen our 2012 schedule? JimDugan.com has created a wonderful way to sort cruises by date, length, or cruise number. Check it out.

I finally have an answer for you folks who wonder what we do for vacation. This past Columbus Day Weekend, one of the most beautiful anyone can remember, we went “upta camp”. Thank you Joanna, David, and Cheryl for sharing Camp Puckerbrush and giving us a chance to get away.

The paddling was awesome! Sunsets and My Katahdin in the background were heart warming. Such a big piece of my soul is in the North Woods. So if I have a place to go when I am not aboard Mary Day it is to the woods from which Mary Day was built. A neat circle if you ask me.

OK, that is it for now. Hope you are all being well and doing good.